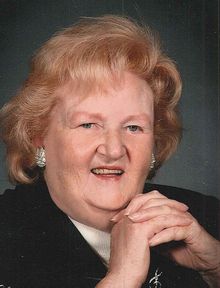 Norene Ione (Pedersen) Rannells was born July 31, 1929, in rural Crawford County to Peter and Emma (Weber) Pedersen. Norene was baptized and confirmed at St. John Evangelical Lutheran Church in Dunlap and was a lifetime member of the church. She received her schooling in Dunlap and graduated with the class of 1946. Norene earned her cosmetology degree in July of 1947 and worked for 20 years at this profession.

On October 12, 1947, Norene married Williams C. Rannells. The family lived on the Rannells farm for 25 years. In 1967, Norene graduated from nursing school at Iowa Western Community College. She enjoyed working in the medical profession at both the Harlan and Missouri Valley Hospitals, as well as private duty nursing. Music was a vital part of her life and she was honored to be the church organist at St. John's for 52 years. She also taught Sunday school, sang and accompanied the church choirs, and actively helped with committee work and fund raising for the construction of the current church building. Norene was one of the founding members of the Dunlap Historical Society, co-founded the Sunshine Club, served as a state officer of the Rebekah Lodge, and held district offices in the women's department of the Lutheran Church.

Norene and Bill loved dancing, camping, and attending the activities of their children and grandchildren. Church was very important to her and her strong faith sustained her through hard times. She looked forward to being with her Heavenly Father and to live in the comfort of His love.

To order memorial trees or send flowers to the family in memory of Norene Rannells, please visit our flower store.