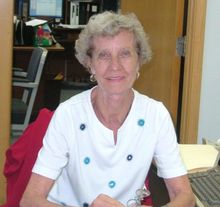 Norine Lou (Walton) Mahlberg was born August 16, 1930, to Chester and Margaret (Hicks) Walton in Dunlap, Iowa. She was raised by her mother in her grandparents' home, William and Ella Hicks. Norine attended public school in Dunlap where she was active in band, baton, and basketball. She graduated from Dunlap High School with the class of 1947. On October 25, 1948, Norine was united in marriage to Henry Mahlberg, Jr. at St. Patrick's Catholic Church in Dunlap. They made their home in Dunlap until 1954; at which time they moved to Panama, Iowa. After Norine's youngest child started school, she took care of the books for Henry's Service. She also worked at St. Mary's Catholic School, the Baptist Memorial Home, Little Flower Haven and Myrtue Memorial Hospital. She worked her
final years at Shelby County Outreach where she taught computer training to senior citizens. Norine retired in 2012 at the age of 82 years young.

Norine was a member of St. Mary's Catholic Church in Panama. She enjoyed reading and crocheting. She made afghans for her children, grandchildren and friends. She especially enjoyed summertime when the neighbors would gather on her front porch. Henry and Norine enjoyed dancing.

Norine died on Monday, September 25th as the result of a house fire in Panama. She attained the age of 87 years, one month, and nine days.

To order memorial trees or send flowers to the family in memory of Norine Mahlberg, please visit our flower store.