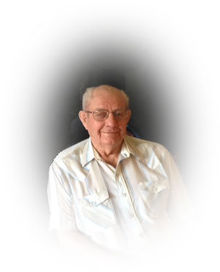 Orville Marvin Wright was born July 4, 1921, to Charles Henry and Ethel Mae (Bardsley) in Weston, Iowa. He was raised in the Weston & Council Bluffs areas and graduated from Abraham Lincoln High School. On May 2, 1943, Orville married Virginia Mae Heiberg in Papillion, Nebraska. The couple lived on a farm near Pisgah. They later bought their present farm northeast of Woodbine. Virginia died on April 27, 2015.

Orville was preceded in death by his parents; wife, Virginia; four siblings, Florence Knudsen, Rolland Wright, Robert Wright, and Gladys Elgan; and granddaughter, Jennifer Alvis Jochims. He is survived by his five children, Janice and her husband Dave Wilson of Livingston, Texas, Leonard Wright and his wife Sharon of Sunrise Beach, Missouri, Judy and her husband Mike Alvis of Woodbine, Iowa, Janette and her husband Rod Severyn of Shell Knob, Missouri, Tom and his wife Jody Wright of Meeker, Oklahoma; 12 grandchildren; 16 great grandchildren; and many other relatives and friends.

To order memorial trees or send flowers to the family in memory of Orville Wright, please visit our flower store.