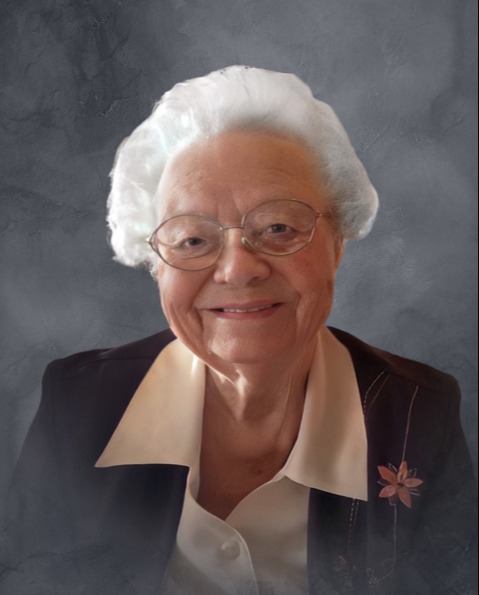 Pauline (Blake) Bonsall was born on March 16, 1916, in Chambers, Nebraska to parents William and Maude (Fluckey) Blake. She attended school in the Burwell, Nebraska area and graduated from Burwell high school. She attended Peru State College. Pauline taught country school in the Burwell area. On June 3, 1938, Pauline married Marion Bonsall in Burwell, Nebraska. The couple lived in Burwell until the mid-1940’s when they moved to Dunlap. Pauline worked with Marion at the Bonsall Appliance Store in Dunlap.

Pauline was a member of the Dunlap United Methodist Church. Pauline loved to travel and had been in all 50 states and traveled to many foreign countries. At the age of 98, Pauline took a Mediterranean Cruise by herself. She was a beautiful seamstress and cake decorator. She had been a Sunday School teacher, Boy Scout and Girl Scout leader. She was a member of the Entre Enous Club and loved to read and do crossword puzzles.

Pauline died on Friday, September 23, 2022, at the CHI Community Hospital in Missouri Valley at the age of 106 years, eight months and seven days.

Pauline was cherished by all who knew her and a blessing to all.

There will be no visitation.

In lieu of flowers memorials may be directed to the family.

To order memorial trees or send flowers to the family in memory of Pauline Bonsall, please visit our flower store.