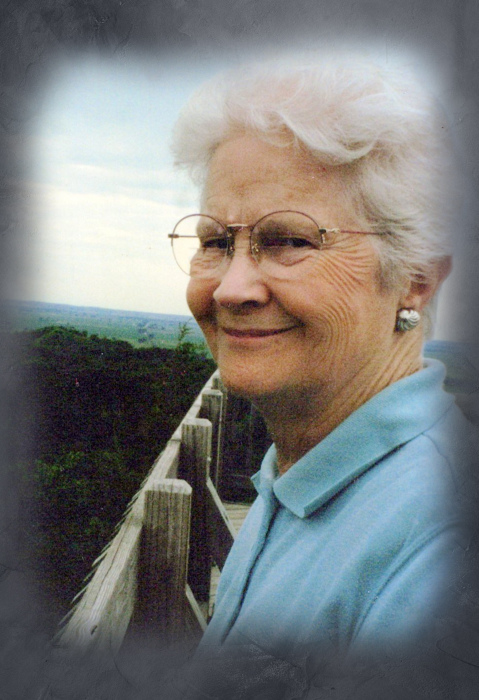 DUE TO FEDERAL AND STATE GUIDANCE ON GATHERINGS DUE TO THE COVID-19 PANDEMIC, MASKS ARE SUGGESTED AT THE VISITATION.

THE FAMILY WILL NOT BE PRESENT AT THE VISITATION.

Phyllis was the second of seven daughters born to Phillip and Barbara (Wettengel) Shields at the farm in Dunlap, Iowa. She graduated from St. Joseph Catholic School in 1942 and attended nursing school at Mercy Hospital in Council Bluffs, Iowa. Upon graduation, she and a friend ventured to Denver, Colorado to work during WW II. After returning to Iowa, Phyllis met Darrell Hansen in the fall of 1947, and they married at St. Patrick’s Catholic Church in Dunlap on April 3, 1948. Darrell had rented a “bottom farm” at Mondamin, where they made their home until 1964. They purchased the Rief farm north of Woodbine and moved their family of 6 children there in March of 1964. Phyllis was active with 4-H activities, religious ed instruction, the Red Cross, and Altar Society. She later joined The Catholic Daughters of America. She had been a member of the Melrose Stitch and Study club at Mondamin and joined the Friendly Neighbors club after their move to the farm at Woodbine and is the last surviving member.

Phyllis returned to nursing in 1968 as a charge nurse at Community Memorial Hospital in Missouri Valley, and later at Rose Vista Nursing Home in Woodbine. Phyllis and Darrell moved to town in 1977, and she served as organizer for many funeral luncheons over the years, toting her “poor man’s Tupperware” with her each time for leftovers for the families.

Phyllis cared for so many friends and family, taking them to doctor’s appointments, fixing meals or driving to business appointments. Her idea of a hobby was any chore she could think of (and she was good at that) that needed done. She learned to play golf in her 60’s and drove the ball down the middle consistently. Phyllis and Darrell shared 71 years of marriage, prior to his passing August 5, 2019. They enjoyed several winters in Arizona, playing golf, going on short jaunts in the area, and visiting many Iowa friends, and new ones they made at the Road Haven Park, in Apache Junction. She always had cookies in the freezer and the grandkids could count on a bag of “Rock” cookies to take back to college when they visited. In her memory, share a cookie with someone or enjoy one with a cup of your favorite beverage.

Memorials may be directed to Sacred Heart Catholic Church or the Woodbine or Dunlap Food Pantry.

To order memorial trees or send flowers to the family in memory of Phyllis Hansen, please visit our flower store.