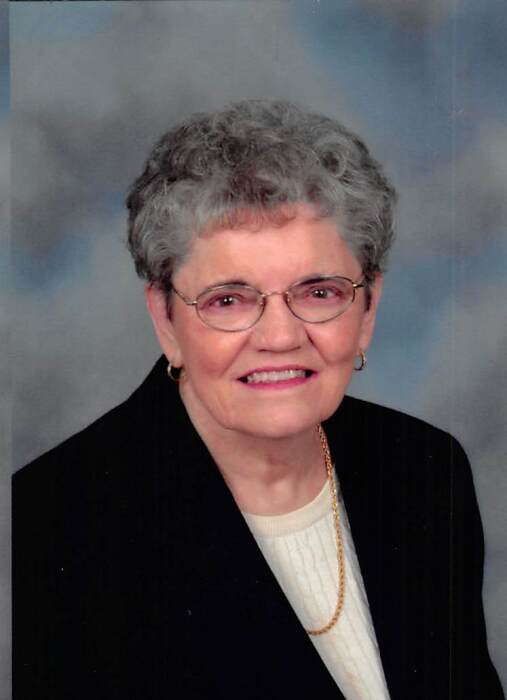 Ramona Alice (Lynn) Sherfield was born an only child of Herb and Cora Lillian (Eggleston) Lynn in Eldora, Iowa, on March 27, 1925. In September 1935, she became a member of the Eldora Methodist Church. Ramona attended school in Eldora and graduated from Eldora High School with the class of 1943. After high school, she was soon employed by Harrissons, and later Youngermans, and lastly Dickson Hardware; all businesses in Eldora.

Ramona married Ray Sherfield, of Ackley, Iowa on August 31, 1948, at the Methodist Church in Eldora. The following year they moved to their farm 13 miles from Eldora, where they lived for 27 years. She led the life of a farm wife helping out as needed, particularly enjoying raising baby chicks and lambs. Ramona and Ray enjoyed traveling together, especially their many trips to Branson, Missouri. Other destinations included: Canada, Florida, Georgia, Washington D.C., and visiting army friends in Tennessee.

Ramona and Ray moved to Eldora when Ray retired from farming in 1976. Ramona later worked at Eldora Manor and Valley View Nursing Homes. She also volunteered at Dorothy’s Senior Center. Ramona was formerly a member of Rachel’s Group and Senior Hearthstone Club; both in Eldora. After Ray’s death in 1996, Ramona sold their home and moved into the Carriage House Apartments in uptown Eldora. After the August 2009 hailstorm in Eldora, Ramona moved to an apartment in Dunlap to be closer to her daughter and son-in-law. Ramona enjoyed making new friends and living in her apartment until September 2018, when she moved to the Dunlap Care Center.

To order memorial trees or send flowers to the family in memory of Ramona Sherfield, please visit our flower store.