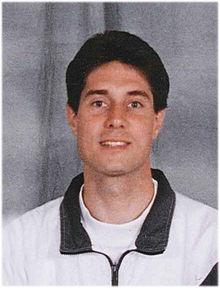 Randy Jerome Houston was born January 24, 1967, to Richard and Jean (Brummer) Houston in Denison, Iowa. He was raised in Dunlap and graduated from Dunlap High School in 1985. He then attended Creighton University and graduated from there in 1990 and started his career in sales. On October 9, 1993, Randy married Tari Blankenfeld in Omaha, Nebraska. The couple was blessed with three sons.

Randy was baptized and confirmed at St. Patrick's Catholic Church in Dunlap. He was currently a member of St. Gerald's Catholic Church and the Knights of Columbus in Omaha. Randy enjoyed watching his boys in their sporting activities, but he particularly enjoyed coaching them. He also enjoyed watching Notre Dame and the Creighton Blue Jays. He enjoyed riding motorcycles, being a member of Boyer Rooters 4-H club and showing cattle. Randy thought his food always tasted better with Blue Cheese Dressing or hot sauce. Every year for Christmas Randy asked for a tie.

Randy was preceded in death by his grandparents, Pete and Grace Brummer and Gerald and Muriel Houston and his uncle, Jerry Brummer. He is survived by his three sons, Zach, Nick and Kyle Houston of Omaha, Nebraska; parents, Richard and Jean Houston of Denison, Iowa; brother, Jeff Houston and his wife Sheila of Panora, Iowa; two sisters, Pam and her husband John McCall of Mapleton, Iowa, Susan and her husband Brad Schrick of Smithville, Missouri; and many other relatives and friends.

To order memorial trees or send flowers to the family in memory of Randy Houston, please visit our flower store.