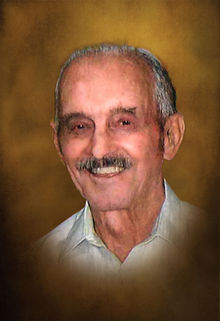 Raymond Bert Lyman was born September 10, 1923, to Bert and Florence (Nichols) Lyman near Dunlap, Iowa. Ray was raised on a farm south of Dunlap where he attended country school. Ray began his farming career with his father. On October 9, 1943, Ray married Burlette Leytham in Logan, Iowa. The couple farmed the Lyman family farm south of Dunlap, which became a century farm in the 1990s, until their retirement and then moved into Dunlap in 2004.

Ray was a member of the Dunlap Congregational Church. The couple loved to travel, plant flowers and decorate for Christmas. Ray enjoyed going downtown for coffee, fix the motorcycles for the grandkids to ride, and he enjoyed riding horses. He also enjoyed pulling the grandkids around in the wagon behind the lawnmower. The couple enjoyed inviting the community to their home to sing Christmas carols and enjoy their various decorations. Additionally they enjoyed caring for their grandchildren whenever they could.

Ray died on Saturday, January 10, 2015, at the Dunlap Nursing & Rehab Center in Dunlap, Iowa at the age of 91 years and four months.

To order memorial trees or send flowers to the family in memory of Ray Lyman, please visit our flower store.