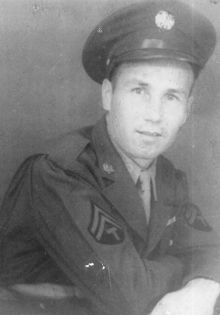 Raymond Michael Nauroth was born on December 9, 1911, to William and Theresa Ann (Feser) Nauroth near Earling, Iowa. He was raised near Dunlap and attended St. Joseph Catholic School in Dunlap. Ray worked on the family farm for a few years. He was working in Lincoln, Nebraska when the United States military called his name. Ray served overseas for 2½ years during WWII. Ray married Geraldine Manion in August of 1951. Ray and Jeri owned and operated the Dunlap Grill for 17 years. Ray also worked for the State of Iowa in the Revenue Division, carried rural mail, and bartended at the Gold Slipper for 47 years. As a young man, he was also involved in the construction of St. Patrick's Church.

Ray was a member of St. Patrick's Catholic Church. He loved playing baseball when he was a young man and of course golfing too. In 2003 Ray aced the 110-yard No. 7 hole at Dunlap Golf Club to make his third hole-in-one at the age of 92.

To order memorial trees or send flowers to the family in memory of Ray Nauroth, please visit our flower store.