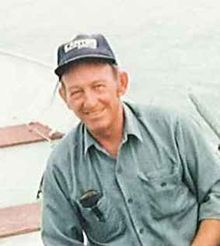 Rex Eldon Clement was born January 21, 1934, in "Nelson Hollow" near Dunlap, Iowa to Laurence Eldon and Wilma Irene (Nelson) Clement. Rex grew up in Dunlap and graduated from Dunlap High School in 1952. After living in California for several years he enlisted in the U.S. Army. He served in the 82nd Airborne Division for three years. Rex was stationed in Fort Bragg, North Carolina, Fort Ord, Washington and Fort Eustace, Virginia. He was trained as an aircraft mechanic and made 42 parachute jumps while with the airborne. Rex was married three times. His second marriage was to Donna Rae Dreyer, and to this union four children were born. In 1963 Rex attended refrigeration school in Minneapolis, Minnesota. He was very mechanically inclined and held many jobs until his retirement in 1996 including: Ye Auld Flower Shoppe and Greenhouse in Denison, Iowa and Thermo King in Omaha, Nebraska.

Rex's hobbies included hunting, camping and fishing on the Nishnabotna River. Rex lived in Carson, Iowa for many years and made many friends there. In 2012 he moved to Mexico, Missouri to live with his daughter, Kim; his beloved "Kimmy Doodle" as he referred to her. Kim cared for him until his death on Monday, January 16, 2017, in Mexico, Missouri at the age of 82 years, 11 months and 26 days.

Rex was preceded in death by his oldest daughter, Jodi Grobe in 1999 and his father, Laurence Eldon Clement in 1981. He is survived by three children, Clay & Laura Clement of Hancock, Iowa, Kim Clement of Mexico, Missouri and Cole Clement of Oakland, Iowa; ten grandchildren; five great grandchildren; mother, Wilma Clement of Dunlap, Iowa; sister, Joyce Auld of Denison, Iowa; and many other relatives and friends.

To order memorial trees or send flowers to the family in memory of Rex Clement, please visit our flower store.