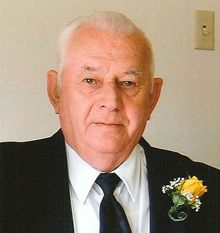 Richard "Dick" Eugene Tiffey, Sr. was born on June 4, 1931 near Woodbine, Iowa to parents John and Huldah (Tensmeyer) Tiffey. Dick grew up in Missouri Valley and attended school there. Due to his father's poor health, Dick went to work at an early age to help support his parents and siblings. Dick served in the U.S. Army during the Korean War. On September 11, 1954, Dick married Mardine Racobs in Logan, Iowa. The couple lived in the Omaha and Council Bluffs area for awhile and then moved back to the Logan and Missouri Valley area. Dick worked for the City of Logan with the street department and then as a Logan Police Officer. He was also a reserve Harrison County Deputy. Dick then worked as a Missouri Valley Police Officer and as the Missouri Valley Street Commissioner. After retirement the couple moved to Missouri for five years. They then moved to Dow City, Iowa for 14 years and then in 2011 moved to Woodbine.
Dick was a member of the Followers of Christ Church in Woodbine. He loved to go hunting and fishing with his boys and being outdoors with nature. He enjoyed woodworking, going to auctions, playing cards, watching football and professional wrestling on the television. Most of all he loved being with his family.
Dick died on Wednesday, November 18, 2015 at his home in Woodbine, Iowa at the age of 84 years, five months and 1 days.
Dick was preceded in death by his parents; son Richard "Rick" Tiffey, Jr.; three brothers Kenneth, Bill and Don Tiffey and two half brothers, Burl and Carl Tiffey. Dick is survived by his wife of 61 years, Mardine Tiffey of Woodbine, Iowa; daughter, Teena (Dan) Brown of Independence, MO; three sons, Gary Tiffey of Schleswig, IA, Randy (Kari) Tiffey of Memphis, IN, Jeff Tiffey and his fiancée Mary of Mountain Top, PA; daughter-in-law, Debbie Tiffey of Woodbine, IA; six grandchildren, Tony Brown, Troy Brown, Lexie Hagle, Elise Bullard, Josh Tiffey and Lyndee Tiffey; six great grandchildren and many other relatives and friends.

To order memorial trees or send flowers to the family in memory of Richard Tiffey, please visit our flower store.