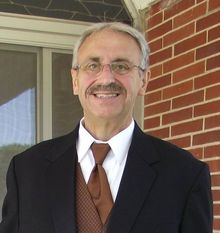 Richard "Rick" Eugene Tiffey, Jr., was born September 5, 1956, to Richard and Mardine (Racobs) Tiffey, Sr. in Council Bluffs, Iowa. He was raised in Missouri Valley and graduated from Missouri Valley High School in 1975. He attended Refrigeration & A/C Schooling. He then received a Business Degree from Iowa Western. He worked for J.C. Penny's in the service department and then at Data Trans-mission Network both in Omaha. On April 8, 1978, Rick married Debbie Killpack in Woodbine at the RLDS Church.

Rick was an elder and pastor at the Followers of Christ. He liked to fish, hunt and most importantly spend time with his grandchildren. He loved to direct the church reunion camps every year. He collected guns and coins and he also enjoyed singing, telling jokes and stories. Above all he loved his family and his church family.

To order memorial trees or send flowers to the family in memory of Rick Tiffey, please visit our flower store.