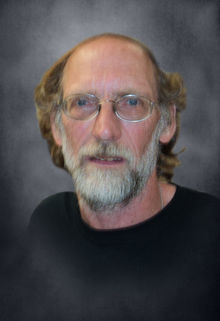 Robert Eugene "Bob" Kroll was born on January 8, 1959, to Henry and Ruth Jean (Renz) Kroll in Denison, Iowa. He was raised in Turin, Iowa and Dunlap, Iowa. He graduated from Dunlap High School in 1977. Robert attended UTI in Omaha in the Auto Body Program. He worked at Ratigan Auto in Missouri Valley, Stoddard Trailers in Dunlap and Farmland in Denison. In the summer of '81, Robert and Jon Chase took a cross-country motorcycle trip to Oregon. Robert returned to Iowa, enlisted and proudly served his country in the United States Marine Corp from 1981-1985. After his honorable discharge, he worked various jobs. On March 31, 1989, Robert married the love of his life, Rachel Chase. He spent the past 24 years working at Omaha Standard in Council Bluffs.

Robert enjoyed his family and took them on many vacations across the U.S. He enjoyed his work of being a painter at OSP. He liked to garden with Catrina, watch Jessie play volleyball and Melissa run track. He also enjoyed attending all of Jeremiah's wrestling matches, as well as, teaching Aiden how to ride his bike. Robert enjoyed a good conspiracy theory and his family believed he could fix anything. Mostly, he loved being a grandpa to Jason and Joseph.

Robert was preceded in death by his parents; one brother, Calvin Kroll in 2001; and one sister-in-law, Rhonda Kroll. He is survived by his wife, Rachel Kroll of Dunlap, Iowa; five children, Catrina (Kevin) Feige of Dunlap, Iowa, Jessie Kroll of Silver Spring, Maryland, Melissa Kroll of Vermillion, South Dakota, Jeremiah Kroll and Aiden Kroll both of Dunlap, Iowa; two grandsons, Jason Eugene and Joseph Eric; brother Dale (Tamara) Kroll of Spencer, Iowa, John (Sharlotte) Kroll of Pierce, Nebraska; and many other relatives and friends.

To order memorial trees or send flowers to the family in memory of Robert Kroll, please visit our flower store.