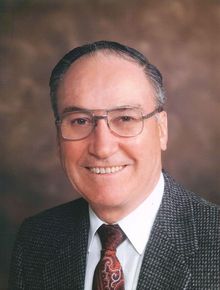 Roland Jenson was born July 27, 1921, to Nels Andrew and Annie Elizabeth (Neill) Jenson in Weyburn, Saskatchewan. He was raised in Canada and attended school there. Rollie's father died when he was 12 years old. Rollie and his brother helped their mother keep the farm going. Rollie worked the wheat harvest for a few years and then he moved to Independence, Missouri in his early 20s. He became a US citizen on June 16, 1955. On May 10, 1957, Rollie married Maxine Johnson at the Stone Church in Independence. To this union three children were born. The family made their home in Independence where Rollie was a machinist for Allied Signal. He retired from there in 1988 after 33 years of employment. He loved to come to Iowa to help Roger with the harvest each year.

Roland was a member of the Community of Christ. He was ordained a Teacher in the church and then later as an Elder. He felt the keys to life were faith and family. Rollie also served as a Boy Scout leader. He enjoyed yard work, gardening and carpentry. When Rollie lived in Independence he also had a painting business and painted many homes there.

Roland was preceded in death by his parents and four siblings, Jim and Leonard Jenson, Violet Williams and Laura Leflar. He is survived by his wife, Maxine Jenson of Woodbine, Iowa; son, Roger Jenson and his wife Meredith of Pisgah, Iowa; identical twin daughters, Lynnette and her husband Curtis Lee of Woodbine, Iowa and Lana and her husband Craig Parrish of San Diego, California; nine grandchildren; one great granddaughter; and many other relatives and friends.

To order memorial trees or send flowers to the family in memory of Roland Jenson, please visit our flower store.