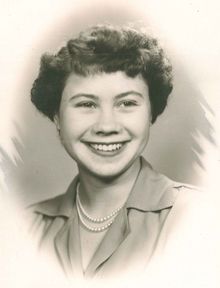 Rosalie Ann (Arbaugh) Oliver was born February 1, 1932, to Schuyler and Doris (O'Dell) Arbaugh in Magnolia, Iowa. She was raised near Magnolia and graduated from Magnolia High School in 1949. She played basketball in high school and was a very good athlete. After graduation Rosalie worked at Darners, PMA (Production Marketing Assistance) Office in Logan and Securities Acceptance Company in Omaha. Rosalie married Warren Oliver on March 13, 1954, at the Logan United Methodist Church. The couple farmed and moved to their current farm in 1966.

Rosalie was a member of the Magnolia United Methodist Church. She loved attending all the grandchildren's events. She always made time for her kids and grandkids. She was a wonderful cook and known for her apple crumb pies. She also loved all animals. On anyone's birthday she would make a special meal of all the things the "birthday person" loved. Additionally she enjoyed writing and driving through the country.

To order memorial trees or send flowers to the family in memory of Rosalie Oliver, please visit our flower store.