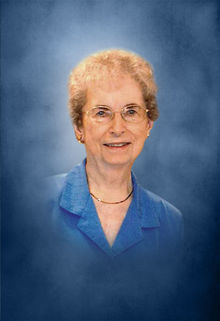 Ruth Ann (Kirk) Casperson was born March 21, 1923, to Carol and Hazel (Judd) Kirk in Dow City, Iowa. She attended school in Omaha, Nebraska until the age of seven. The family then returned to the family farm west of Dunlap, Iowa. Ruth Ann then attended school in Dunlap and graduated with honors in 1941. She was in the Glee Club and enjoyed music while in high school. After her graduation Ruth Ann attended the Omaha University and studied business. She worked in Omaha as a secretary for a few years. Ruth Ann married Arnold Casperson on October 3, 1942, in Newport, Kentucky. The couple lived in Columbus, Ohio for a short time. The couple then returned to Omaha and in 1945 the couple moved to a farm west of Dunlap. Arnold began farming and the couple raised their two children. After Arnold's retirement the couple moved into Dunlap and lived in Ruth Ann's mother's home.

Ruth Ann was a member of St. John Lutheran Church. She served on the building committee, as the treasurer, sang in the choir and was a part-time organist. She was also involved in the historical society, Willow Needle Craft Club, The Boyer Valley Sunshine Club, and Farm Bureau Women.

To order memorial trees or send flowers to the family in memory of Ruth Casperson, please visit our flower store.