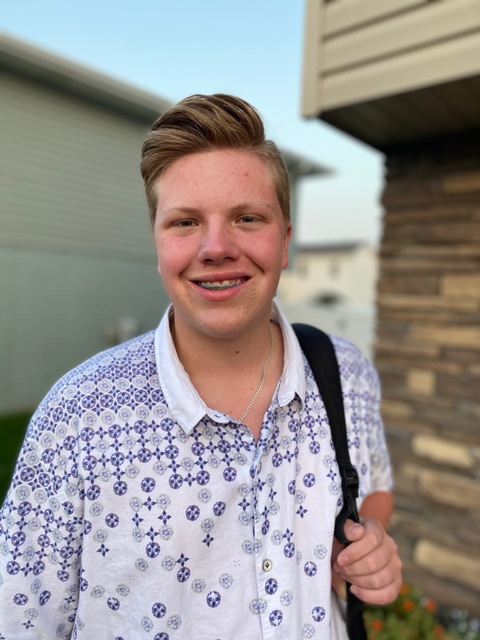 Sailor Cole Lawrence was born on April 1, 2004, in Council Bluffs, Iowa. He was the son of Dave and Cassy (Brouse) Lawrence. Sailor attended Lewis Central Community School. He was the most amazing and unique human to ever have been on this planet. Such an old soul, and he loved all the finer things in life. He could also get back to basics in nature and be a mountain man. He was the epitome of a teenage boy enmeshed with an elderly man, evidenced by his wild adventures, and his love of drinking coffee and hot tea, eating fancy cheeses, and European pastries.

He had the most eclectic tastes. He loved to cook, do anything outdoors, have fun, and most of all he loved to make people laugh. He had wanted to learn how to fly a plane since he could speak, and recently had been taking flying lessons to get his pilot's license. He flew a plane before he was legally able to drive a car. He wanted to learn how to sail, and had spoken of plans to sail around the world.

When he had an idea, he became fully invested in that passion. Although he went through many different passions throughout his short life, he was constantly entertaining, and it was inspiring to see him get so involved in every single thing that he did. He easily let everyone around him know that he loved them. He was open with his affection both verbally and physically. He thrived in showing love and shock and awe.

Sailor died on Tuesday, March 16. 2021, at the age of 16 years, 11 months, and 15 days. He will be deeply missed by all that were blessed to know him. The family asks that we continue his legacy by spreading kindness, spreading acceptance, spreading love, and living each day to the fullest.

Sailor was preceded in death by great grandparents, Bob Pyles, Betty and George Lawrence, Lloyd and Delores Brouse and Walt and Cecelia Wegner; and great-great grandmother, Hazel Koski. He is survived by his parents, Dave and Cassy Lawrence and siblings, Wyatt and Maizy Lawrence all of Council Bluffs; grandparents, Kim and Chris (Fouts) Brouse, Tom and Sherry (Pyles) Wegner, and Betty Lawrence all of Council Bluffs; two uncles, Jaden Brouse and CJ Griffin, both of Council Bluffs; great-grandparents, Sandra Pyles of Council Bluffs and Phil and Anita Fouts of Woodbine, Iowa; and numerous great aunts and uncles and cousins and a wonderful group of friends. He was so loved and so blessed and also survived by his cousin and friend, Addee Murray; special sister, Jolan Bixler; special aunts, Emmy Bixler, Emelie Reyes (and family), and Erinn Beresford; special aunts and uncles, Mike and Van Fleuren (and family), Bryon and Amy Beins, and Sterling and Karen Lehmer; and special grandparents Jim and Rose Bixler.

Sail on and fly high, Sailor.

In lieu of flowers, memorials directed to the family to be dispersed to some of Sailor's interests and organizations that focus on mental health and suicide prevention.

To order memorial trees or send flowers to the family in memory of Sailor Lawrence, please visit our flower store.