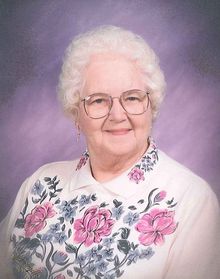 Shirley Grace (Young) Michael was born August 29, 1922, near Woodbine, Iowa to LeRoy "Dick" and Undine "Una" (Holeton) Young. She grew up in the Woodbine area and graduated from Woodbine High School in 1939. She was a clerk at Sibel's Store, Moore Brothers and also taught country school. On March 1, 1942, Shirley married Dale Michael at Zion Lutheran Church in Magnolia. The couple lived north of Magnolia before moving into town in 1970. They operated the filling station and consignment shop in Magnolia. Shirley then went to work for Harvey's in Logan. They moved to Logan in 1982. Dale died on April 29, 1995.

To order memorial trees or send flowers to the family in memory of Shirley Michael, please visit our flower store.