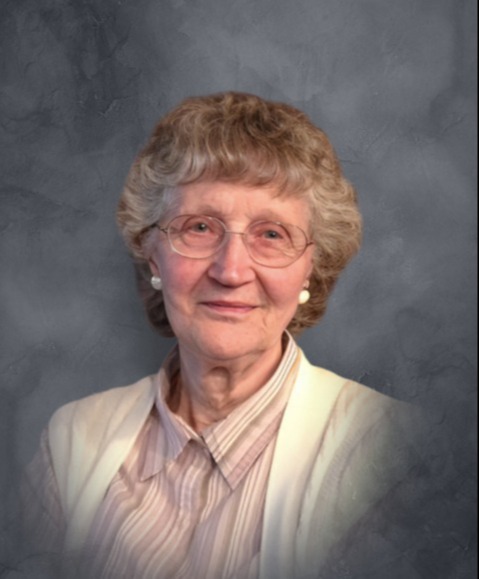 Sophia Frances Esser was born on September 19, 1927, in Gray, Iowa to Joseph and Katharina (Mueller) Brandt, who were German immigrants. She was baptized at the Sacred Heart Catholic Church in Templeton, Iowa. Sophia attended Aspinwall Independent School where she was the only one to graduate from her eighth grade class. In her later years Sophia enjoyed telling others that she graduated Valedictorian! After finishing school, Sophia worked as a nanny, waitress, employee at the egg and chicken plant and manager of three clothing departments at Montgomery Ward in Denison, Iowa. On April 28, 1953, Sophia was united in marriage to Marcus Esser in a double wedding with her sister Catherine who married Marcus’s cousin Walter Bissen. Sophia and Marcus were blessed with seven children. She worked alongside her husband on the farm where they raised chickens and hogs in addition to their dairy farm. Sophia also had a very large garden that she cared for.

Sophia was a long-time member of the Sacred Heart Catholic Church in Woodbine where she was a member of the Altar Society and taught CCD. Due to her special devotion to Mary, she prayed the rosary daily, and her favorite Marian song was “On This Day Oh Beautiful Mother”. Sophia was also known and loved for her baking skills. She always had homemade bread in the kitchen and was known for her homemade jelly, which at times included wild plums, choke cherries and mulberries. Sophia also loved baking molasses and sugar cookies and sharing her baked goods with others. Throughout her life, Sophia cherished time with her family, especially visiting and playing games with her grandkids and great-grandkids. She delighted in receiving visitors and loved making others happy. Her grandkids will forever cherish her warm smile, the humorous gifts she gave, sleepovers at her house and memories of her dressing up as Santa Claus. Sophia will always be remembered for her joyful spirit and ability to create laughter and fun at holidays and family gatherings.

Sophia died on Thursday, November 10, 2022, at Azria Health Rose Vista Nursing Home in Woodbine, Iowa at the age of 95 years, one month and 22 days.

To order memorial trees or send flowers to the family in memory of Sophia Esser, please visit our flower store.