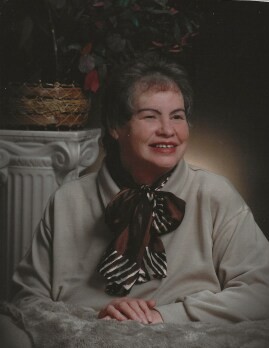 Virginia May (Clark) Thompson was born July 17, 1942, to Earl and Marie (Symko) Clark, on a flat boat on the Missouri River near Bellevue, Nebraska. She had thirteen siblings with the loss of a set of twins at birth and a baby girl at an early age. She was named Virginia, after that baby girl. She grew up near the Bellevue area and was married to Bernard Thompson of whom was part of a family close by and they had known each other since childhood.

Dolly, as most people came to know her, was a name given by her father who commented how she looked just like a little doll. Her mother was from Canada and her father was of Irish descent.

Dolly became a farmer's wife at the age of 16 and they moved to Harrison County. The majority of her younger married life was taking care of their young children, Doreen and Keith, and helping out on the farm, "doing what farm wives did."  They lived by Hardscratch for a short time and took care of sheep in which she said, "They were never where they were supposed to be." The sheep were a short-lived endeavor.

Dolly did not drive a car until after the first two children were born. The third child was lost during pregnancy. The fourth child, Evonne, would not be born until a few years later. Dolly would go through a lot of changes during married life and did not get her GED until she was almost 30.

The family enjoyed a lot of ventures in camping, which started out with the station wagon, then to the tent, next to the pickup camper and finally to a pull camper. They enjoyed fishing and vacationing, near and far, which sometimes included other members of Bernard's family. Ohhh, the stories the three kids could tell and experienced.  Bernard was also an avid coon hunter and for many years Dolly spent time going with him on his club hunts, and she took part in the wife's group that stayed up to all hours of the night waiting for the men to come back from their hunt. She also engaged a lot in 4-H activities and church needs in the Lamp Lighters team, in the kitchen and in the nursery. Dolly spent many years sewing and taught the girls how to sew and bake. Bernard made the special treats like black walnut fudge and divinity. They all learned how to pluck chickens and help butcher a cow or a pig once in a great while. One of her son-in-law's got to experience the adventures of farm life.

As Evonne neared Junior High age, Dolly started working outside the home. Dolly spent many years working at the Harrison County Historical Museum. She enjoyed giving tours and working with Lucille Latta and Wanda Nelson. After the museum would become a self-run entity, she worked at CDC in Harlan until her life changed drastically. Bernard, whose health had been declining more rapidly in the past few years, passed away. She also lost her father and her mother in the three months following Bernard. She had struggled with diabetes and depression prior to these events but it took a stronger hold as losing a spouse of so many years can impose a crippling effect upon a person. She struggled deeply to adjust to being a widow.

Dolly stayed at her job in Harlan for a short time but then tried some mercantile jobs in Omaha for a few years. Being a sales person wasn't working out for her so she opted to take some courses to become a Home Health Aid. This is where she would finish out her career. Being a Home Health Aid gave her some purpose and she was able to interact with and care for other people. "Mosaic Health Assistance" was her last stop before she retired. She did not camp and fish too much after Bernard passed but continued staying on her farm as a means for support. Eventually it just became feasible to cash rent the farm crop while she did work and when she retired.

Dolly was blessed to see her grandchildren grow up and even welcomed some great-grandchildren. She spent a lot of time visiting family and friends and spending time with her grandchildren. She continued to sew and could make patterns from scratch but yet called herself 'not very talented'. She made many things for her grandchildren. She was always baking and liked to shop, especially 'window shopping' which she did a lot to get ideas for things to make. She liked getting out of the house when she could or watching the cats from her back porch and whatever other critters decided to come steal the cat food.

Because of her desire that life had something more to offer than just living, she was the person who sought out church. When the kids were younger and couldn't get to church, she made sure they watched some church-related children's programs on Sunday morning. If it wasn't for her, church and God wouldn't have been a part of their lives.

Dolly is survived by two daughters, Doreen (Mark) Epperly of Marquette, Nebraska and their daughter, Jasmine, and Evonne (Jim) Clinkenbeard of Denison, Iowa and their two children, Rae and Bryce; daughter-in-law, Rose Thompson of Logan, Iowa and her four children, Nathenial, Matthew (Michelle), Samuel and Stephanie; four great-grandchildren; step-grandson, Russ Methvin and his daughter, Phoebe; two brothers, Gene Clark of Bellevue, Nebraska and Ron (Terri) Clark of Texas; sisters-in-law, Judy Clark of Omaha, Priscilla Thompson of Missouri, Carolyn Thompson of Georgia and Marilyn Berens of Dunlap; and many other relatives and friends.

To order memorial trees or send flowers to the family in memory of Virginia Thompson, please visit our flower store.