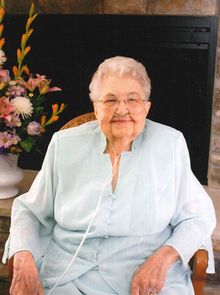 Vivian Irene (Hansen) Kaufman was born May 11, 1921, in Beebeetown, Iowa to Leonard and Elizabeth (Burkhead) Hansen. She grew up in the Logan area and graduated from Logan High School in 1938. On September 23, 1941, Vivian married Frank Kaufman at St. Joseph Catholic Church in Earling, Iowa. The couple farmed in Shelby and Harrison Counties and moved to Woodbine in 1976. Vivian had cooked at the Holiday Café in Harlan, Iowa as well as Bob's Café and the Golden Age Center in Woodbine. She retired from the Golden Age Center when she was 80 years old. She thoroughly enjoyed baking pies for people in the community after her retirement.

Vivian was a member of the Sacred Heart Catholic Church in Woodbine. She had also been a member of various neighborhood clubs over the years. Vivian liked to quilt, and she loved to cook and bake.

To order memorial trees or send flowers to the family in memory of Vivian Kaufman, please visit our flower store.