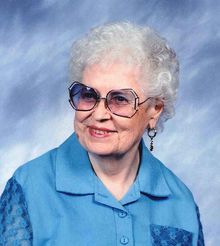 Vivian Narcissa (Becker) Moore was born on December 10, 1920, near Bagley, Iowa to Franklin Jacob and Margaret Dawson (Muir) Becker. She attended school in Bagley, Iowa graduating as the Valedictorian in 1938. In October of 1941, Vivian married Col. Rex E. Zepp in Ames, Iowa. Rex was killed in an airplane accident at Minot South Dakota Air Force Base. In October of 1946, Vivian married Dr. Robert Moore in Nevada, Iowa. She attended Iowa State University graduating in 1949. The couple moved to Dunlap in 1950. Vivian started the Homemaker and Home Health Program in Harrison County in 1974. In 1978 she became a district supervisor for the Homemaker and Home Health Program in an eight county area.

Vivian was a member of the Dunlap United Methodist Church, Order of Eastern Star and Daughters of the Nile in Omaha. Vivian was very active with the Dunlap Care Center auxiliary and served as President for a number of years. Vivian was loyal to her alma mater and was always an avid ISU fan during each and every season. She loved crocheting, knitting, doing crafts, reading, bird watching, feeding the squirrels, and she loved her cats. She also loved to care for animals ~ especially cats, dogs and birds.

Vivian died on Thursday, October 15, 2015, at the Rose Vista Nursing Home in Woodbine at the age of 94 years, 10 months and five days.

Vivian was preceded in death by her parents; both husbands; and two brothers, Douglas Muir Becker and Robert Alan Becker. She is survived by her three children, Robert Gordon Moore II of Dunlap, Iowa, Teri Michelle Herron-Sherk and her husband Jim Sherk of Redondo Beach, California and Marc Franklin Moore and Wendy Sandberg of Albuquerque, New Mexico; three grandchildren, Alexis Moore, Kate Herron and Jake Herron; one great granddaughter, Araya Moore; and many other special relatives and friends.

To order memorial trees or send flowers to the family in memory of Vivian Moore, please visit our flower store.