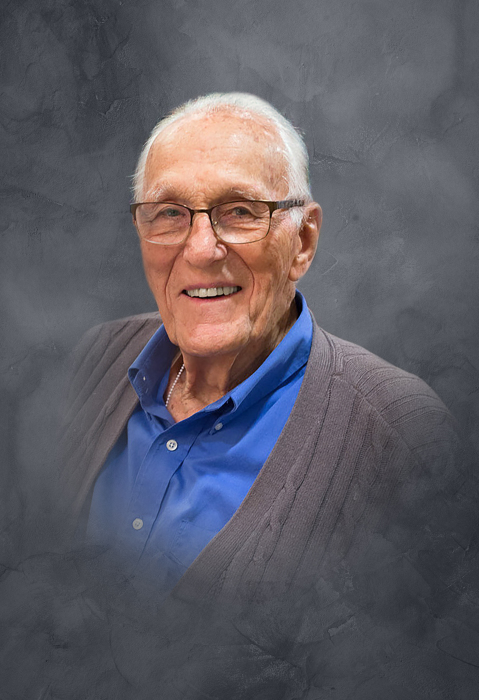 In lieu of flowers, memorials may be directed to the Woodbine Main Street Chamber or the Woodbine Community Foundation.

Zell Lawrence Millard was born May 18th, 1922, in Dunlap, Iowa, the son of Henry and Bernese Millard. He was raised there on a Century Farm, originally operated by his grandfather. He grew up during the Great Depression, which laid the foundation of his compassion and empathy for the less fortunate later in his life. At Dunlap High School he played on the basketball team, played baritone saxophone in concert band, sang in the chorus, and acted in the school’s theater productions.

Upon graduating he moved to Omaha, Nebraska, briefly attending Omaha University while working at Fitch & Cole Funeral Home, singing in a barbershop quartet, and playing a doctor on an afternoon radio soap opera.

Answering the call of his country, he left Omaha to serve as a Staff Sergeant during World War II, assigned to the 459th Air Service in the Army Air Corps stationed at Greenham Common Air Base in southern England. Prior to D-Day he was assigned to the first Allied Airborne Army, which took him to the campaigns in Normandy, northern France, and Ardennes. As a Medic, he treated both Allied and enemy soldiers. Later in life he became a member of the American Legion and VFW.

Upon returning to Omaha in 1945, he met Marie Romey, who worked in the same building, took the same streetcar home, and was smitten by his sense of humor. They were married November 16, 1946, moved to Woodbine in 1950, raised five children, and celebrated nearly 59 years together. Zell was a father who attended all his children’s basketball games, delighted them with crazy dances and an annual 4th of July fireworks show, taught them how to fish, carve pumpkins for Halloween, and sled down Park Hill, and he took them to Kansas City to see the Athletics play the legendary 1961 New York Yankees, the greatest team in history.

Upon arriving in Woodbine in 1950, he opened Millard Hardware, which he operated until 1962. He was then employed by Sylvania Corporation in their Lighting Division, retiring in 1986.

Zell had a lifelong interest in politics and public service. He served as Mayor of Woodbine from 1971 to 1980, then later as the Republican Party County Chair, Chair of the Inaugural Committee for Iowa Governor Terry Branstad, and on the Iowa Judiciary Nominating Committee, appointed by the Governor to provide nominations for the Appellate and Supreme Courts.

He was a born practical joker, a man of many quips, and quick with a comeback. When recently asked by a nurse in which arm he wanted his flu shot, he pointed to his son’s arm and replied, “that one.”

Inspired by the saying “Plant a tree under whose shade you know you will never sit,” he leaves a legacy of civic service and volunteer work for the City of Woodbine, Harrison County, and the State of Iowa. He was instrumental in securing HUD funding for the construction of Woodbine’s Woodland Apartments, helped establish Kiwanis Park and Merry Brook School, was a member of the Woodbine Community Betterment & Development Group, the Iowa Planning Council, Southwest Iowa Regional Coordinating Council, Job Training Partnership Act Council, the Lincoln Highway Association, and the Woodbine Main Street Project, being named the State of Iowa’s Main Street Volunteer of the Year in 2012. In 1992 he traveled to China as a member of the People to People International Exchange Program. He announced Woodbine’s high school football games and Homecoming festivities for over 40 years, and served as Master of Ceremonies at Woodbine’s annual Memorial Day observance. Known affectionately by some as ‘Mr. Woodbine,’ he was recognized by the town with the dedication of Zell Millard Historical Preservation Park in 2011.

He is preceded in death by his parents; wife, Marie Millard in 2005; infant daughter, Mary Beth; and sisters, Ruth Millard and Opal Johnson. He is survived by children, Joyce Millard-Hoie (John Hoie) of Phoenix, Arizona; Victoria Millard (David Avery) of Seattle, Washington; Timothy Millard (Evelyn) of Wichita, Kansas; Terence Millard (Beth) of Columbus, Nebraska; and Bruce Millard of Boston, Massachusetts; seven grandchildren; six great-grandchildren; and many other relatives and friends who celebrate a life well-lived and lovingly remembered.

In time a man disappears

from his lifelong fields, from

the streams he has walked beside,

from the woods where he sat and waited.

Thinking of this, he seems to

miss himself in those places

as if always he has been there,

watching for himself to return.

But first he must disappear,

And this he foresees with hope,

with thanks. Let others come.

from Leavings, by Wendell Berry, 2007

To order memorial trees or send flowers to the family in memory of Zell Millard, please visit our flower store.