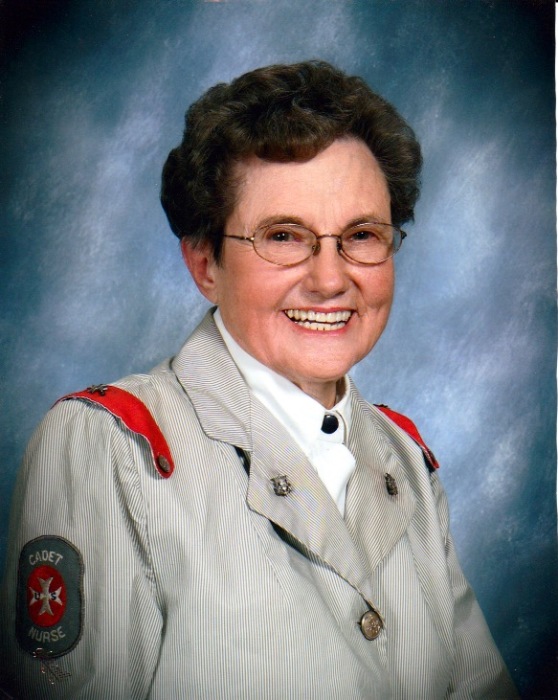 Zola Beth (Barnett) Leonard was born on October 2, 1924, to Ralph and Gertrude (Hampel) Barnett in rural Underwood, Iowa. She was raised in Underwood and graduated from Underwood High School with the class of 1941. Zoe enrolled at Jennie Edmondson School of Nursing and also took extra classes at the University of Omaha. Zoe enlisted with the United States Army Cadet Nurse Corp, from July 1943 until September 1945. She served at Johns Hopkins Hospital in Baltimore, Maryland. She graduated as a registered nurse in September of 1945. Zoe spent the next three years working at a doctor’s office in Council Bluffs. On December 8, 1948, Zoe was united in marriage to Ivan “Ike” Leonard at her aunt and uncle’s home in Council Bluffs. Three children were born to this union: John, Jane and Robert. Zoe also worked as an RN in the OB Ward at the Myrtue Medical Center in  Harlan, Iowa and the Community Memorial Hospital in Missouri Valley Iowa, for over 35 years. In 1995, she started at the Rural Wel-Home Health in Logan, Iowa. She retired from active nursing   duties in 2010, at the age of 87.

Zoe was a member of the United Methodist Church in Logan and Woodbine, Iowa. From 1948-2011 Zoe enjoyed living on Echo Acres Farm along Pumpkinvine Road near Highway 44,  Logan, IA. Zoe’s guiding hand in raising three children, along with enjoying the scenic view of the timbers and pastures near the farm home, plus helping with farming duties such as milking and herding cows, and raising stock  cattle occupied her time. She enjoyed family reunions and sponsoring American Field Service (AFS) picnics.

Zoe took part in many organizations including: The American Legion Auxiliary, volunteering for the American Red Cross, business women’s sorority known as Beta Sigma Phi, the University of Women’s Association, Eastern Star, Democratic Party activities (she was on a first name basis with Senator Tom Harkin) and Crime Stoppers. She enjoyed Ballroom and Square Dancing, and she especially enjoyed travelling to visit family members throughout the United States, Canada, as well as overseas.

To order memorial trees or send flowers to the family in memory of Zoe Leonard, please visit our flower store.